In this article, I will take you to Jamalife Helpers Global.

You must be asking yourself whether this platform is legit or just another scheme to steal from you.

Is it worth your money and time?

And can you trust Jamalife Helpers Global with your money?

Let’s find out, but I would like to remind you that I am not associated with Jamalife Helpers Global.

My article is meant for review and nothing more.

Type of the Product: MLM Program

Jamalife Helpers Global claims to be a multi-level marketing platform that promotes diverse products and, at the same time, the market itself.

To become part of the program, you will pay a subscription fee of $5.

This amount will allow you to access the platform’s affiliate marketing program.

This review will help you understand Jamalife Helpers Global better.

As an affiliate, your main objective will be to recruit as many new members as possible.

You earn a commission whenever you invite a new member to join the platform.

Jamalife Helpers Global may not be as easy as they make it appear.

There are other best alternatives you can venture into and make huge profits.

And one of them is the business model I have structured in the below section; you can freely check it out:

What Is Jamalife Helpers Global About? 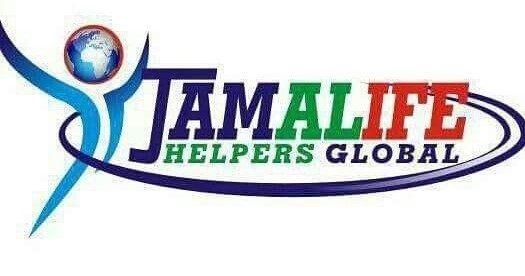 Jamalife Helpers Global is an MLM platform launched in December 2016.

Not so much information is known about the company except a few details posted on the company’s platform.

However, the site does not give you many details about the platform.

Also, this platform offers its members an opportunity to earn money through an MLM opportunity.

The company claims that you’ll earn good commissions when promoting the program to others.

You will earn more commissions if you build a large team of downline members.

Every downline member will be contributing to your overall commission.

They don’t sell any tangible product, but they are after promoting the opportunity itself.

Who Is The Owner(s) Of Jamalife Helpers Global?

If you want to join the MLM industry, I will advise you to check on the platform owner.

Knowing about the owner(s) will help you relate their successes or failures with the current product they’re selling.

If they have a successful history, your chances of succeeding are high.

On the contrary, if they have registered failures in their previous experience, you will likely fall for the same.

Unfortunately, Jamalife Helpers Global does not reveal the person’s identity behind its creation.

But what I discovered was when the company’s domain name came live.

Jamalifehelpersglobal.com allegedly was registered in late 2016.

The owner(s) registered this domain privately.

This will make it impossible for anyone who wants to know about the owner.

Why would the creator of jamalifehelpersglobal.com hide his identity from the public?

After digging further into Jamalife Helpers Global, I found out that most of its traffic comes from Africa, and Nigeria, to be specific.

It is more likely that jamalifehelpersglobal.com is running its operations from Nigeria.

In this method, the company directly recruits two investors on the top level.

These top-level investors will, in turn, recruit two members each, and the process goes downwards to the last member.

The company pays you commissions depending on the number of your downline members.

This will motivate you to build a strong network of downline members.

Once you register freely in Jamalife Helpers Global, you’ll have spent $5 to become an affiliate member. 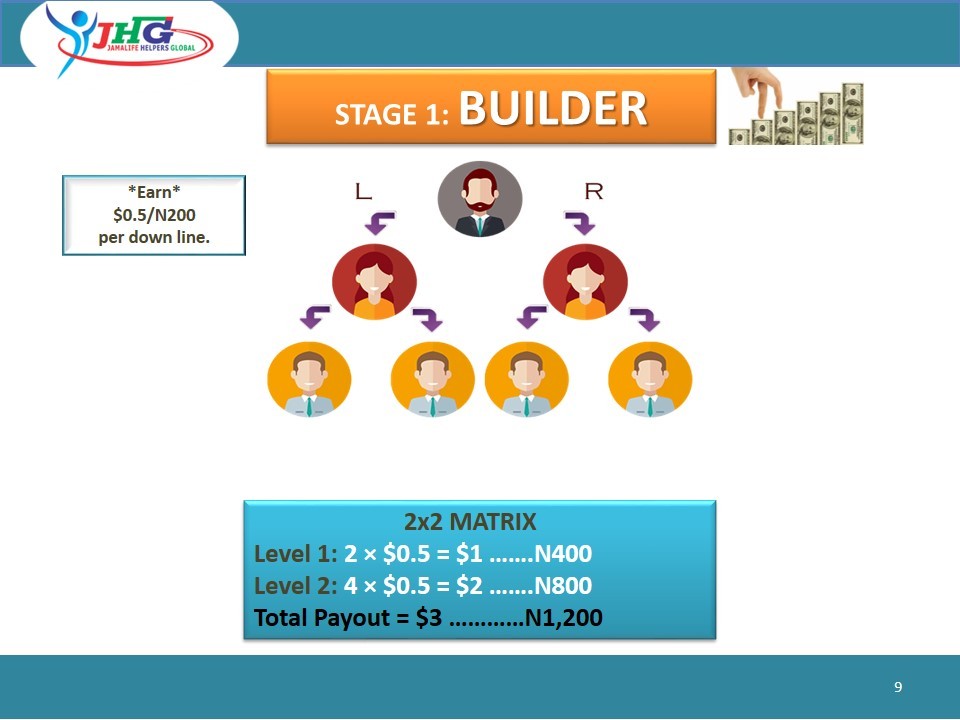 After you activate your account, when you recruit two members to your first level, you earn $1.

You earn an additional $2 by recruiting 4 downline members to your second level. 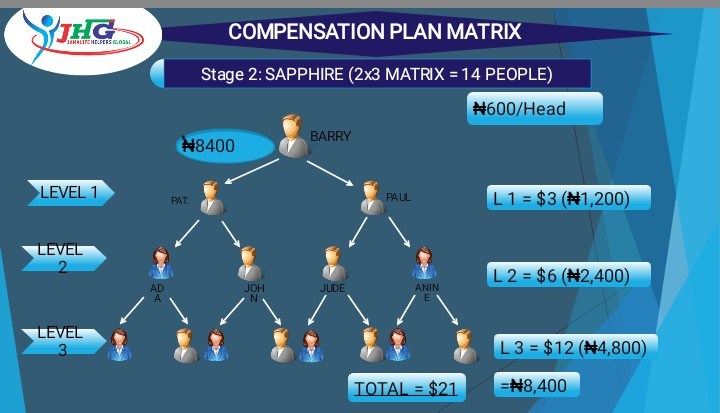 You must meet the requirements of the first stage before upgrading to stage 2.

Also, you enjoy $3 if you recruit two first-level members in this stage.

You also earn $6 and $12 for recruiting 4 members to the second level and recruiting 8 to the third level. 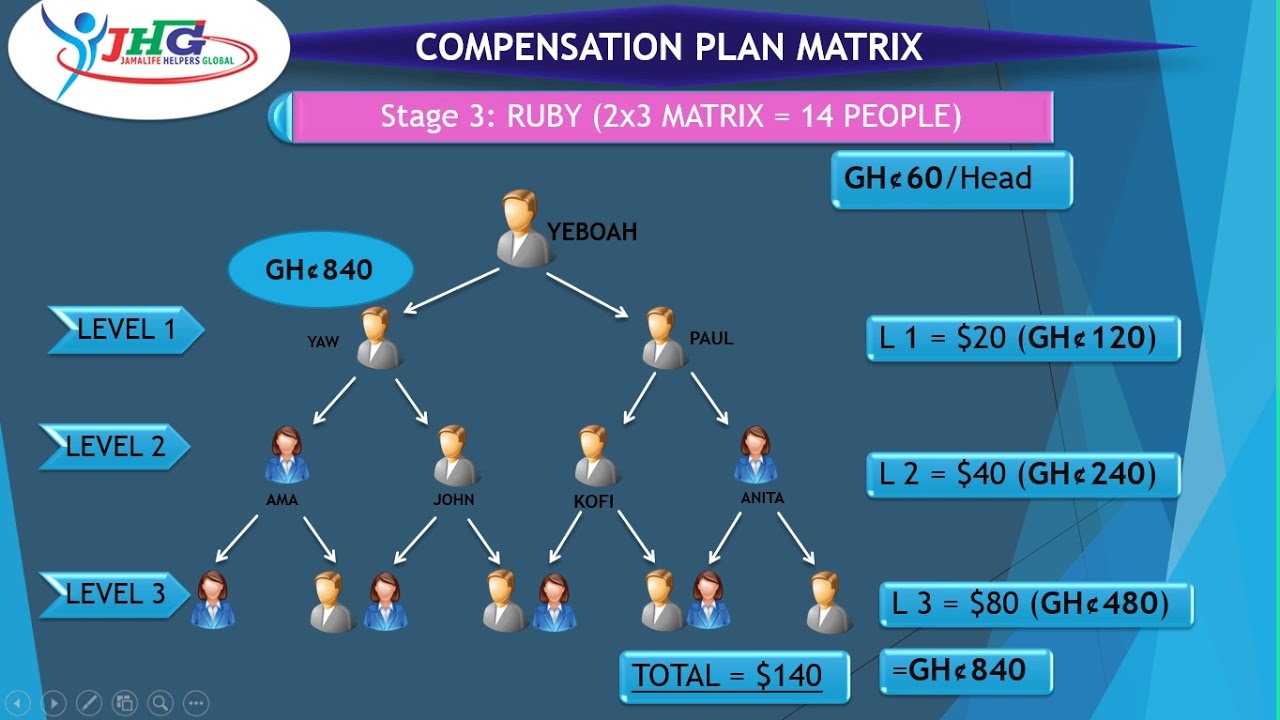 In this stage, they claim to award you a commission of $20 when you recruit 2 members to your first level.

You’ll also earn $ 40 when you recruit 4 members to your second level and $80 for recruiting 8 new to your third level. 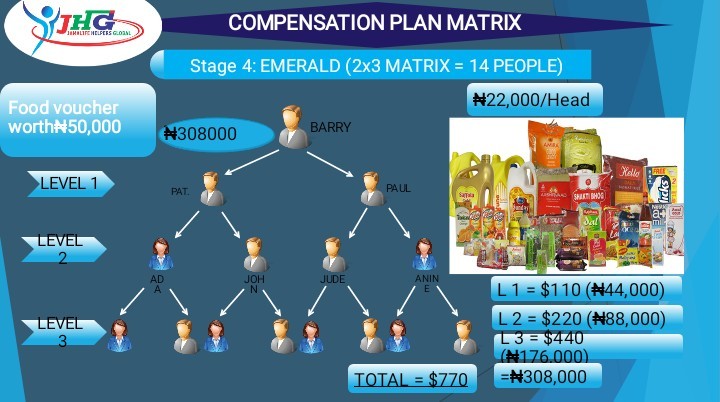 This level gives you $110 for recruiting 2 new members into your first level.

Another benefit of this stage is food vouchers worth $250 and gadget incentives worth $1,000. 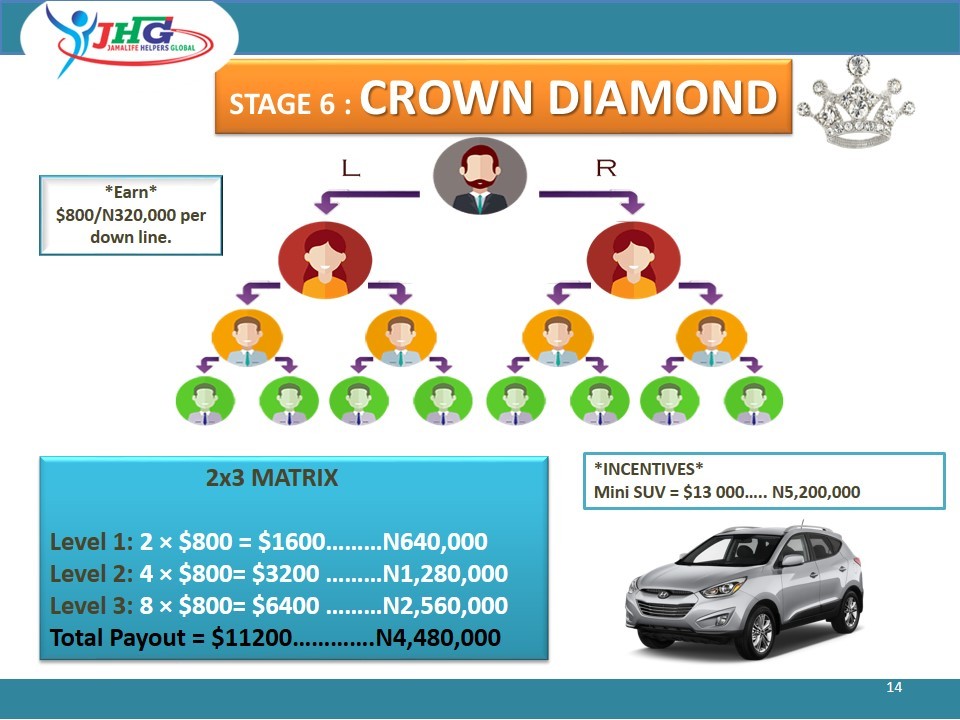 This stage gives you $1,600 when you recruit 2 members to join level one.

Additional incentives in this stage are medical insurance worth $250 and a Mini-SUV worth $13,000.

Jamalife Helpers Global claims they offer members in this stage $8,000 for recruiting 2 members into their level one.

Further, they claim to give their members in this level additional bonuses, which include a food voucher & medical cover worth $500, a travel package worth $10,000 and a car worth $50,000.

They claim to give its members $40,000 for recruiting 2 new members to join their first level.

The company also claims to give the following incentives.

Did it catch your attention?

Forget about all these claims.

The company does not provide substantial evidence of people who have benefitted from their compensation plan.

But if you need to start an online business from scratch without paying a huge amount of capital, then I recommend that you check out how I’m personally doing it: 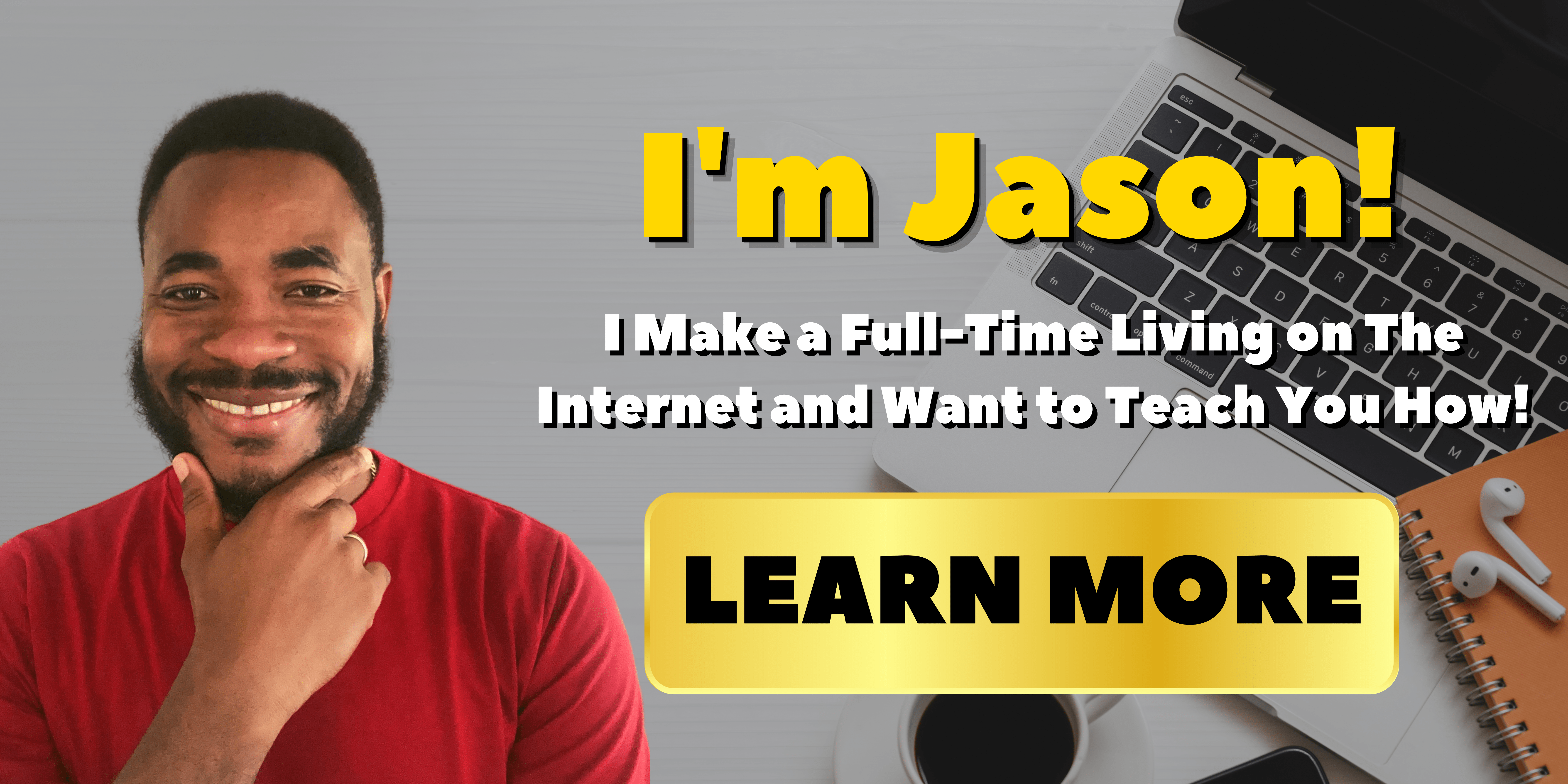 What Is the Cost Of Jamalife Helpers Global?

Joining Jamalifehelpersglobal.com is free of charge.

However, you’ll have to pay $5 to participate in the platform’s earning opportunity.

You must also have your first upline member who introduces you to the platform.

These members will be your sponsor.

Your sponsor’s ID will be necessary during your registration process.

The company claims that you can register yourself as an affiliate, or your sponsor can help you with the registration process.

Since this Jamalife Helpers Global will be relying on recruitment, you might spend more money building your downline team.

The amount of commissions you receive depends on the number of your downline team.

Even though MLM business models are legit, their success rates are extremely rare.

And their main source of income mainly revolves around recruiting more members to their platforms.

Also, Federal Trade Commission conducted research that revealed that 99% of investors who invest in MLM business models are more likely to register losses.

And since Jamalife Helpers Global does not offer any tangible, it is more suspicious.

This program is likely to be a pyramid scheme.

Both MLMs and Pyramid schemes depend on the recruitment of new members.

This makes these business models too risky to invest in them.

Pyramid Schemes have been banned in most countries, including the Netherlands, Belgium, United Kingdom, United States, and Canada.

Always remember that most digital platforms that rely on the recruitment of members as their only way of earning always end up collapsing.

Most people who fall into the traps of such platforms regret and blame those who recruited them to such systems.

Just imagine yourself being at the bottom level of such a system and not able to recruit.

If such happens to you and extends to other members, the company will eventually collapse.

And remember, it will have wasted both your time and money.

There are other good online opportunities you can tap into and still make money out of them.

Is Jamalife Helpers Global a scam?

The fact that Jamalife does not have any tangible product to offer apart from what it claims as an opportunity to make money makes it a very big scam.

And how can you make money without knowing what you are selling?

Honestly, this is a pyramid scheme that you’ve to be very careful about.

In a profitable MLM business model, you are given merchandise to sell at a retail price.

And you earn a commission selling this merchandise.

On the contrary, Jamalife does not support the sale of any retail product.

On top of this red flag, you must remember that pyramid schemes have been banned because they are illegal.

What’s more, most of them are operating in disguise to prevent easy detection by authorities.

Also, consider that the creator(s) of this platform does not provide sufficient information.

In addition, the owner(s) are not disclosed, making it more suspicious.

And if Jamalife Helpers Global is truly genuine about this business opportunity, it could have clearly stated its ownership.

There is nothing to hide from your prospective clients.

And instead of wasting your precious time and investment on Jamalife Helpers Global, there are other best online opportunities you can leverage and build a more secure source of income.

Honestly, there is nothing positive to like about Jamalife Helpers Global.

And I don’t recommend it to you.

In fact, there are other best alternative digital businesses you can leverage and earn good money from and you can check out my all-time recommendation here.

Jamalife Helpers Global depends on the recruitment of new members to make profits.

And you can’t succeed if you don’t have the power to convince others to join.

In most cases, investors use Better Business Bureau to determine the credibility of different businesses.

And potential investors usually don’t prefer to invest in businesses that have not received BBB ratings.

Many things about Jamalife Helpers Global have been hidden from the public.

And this includes the basic information such as the product owner.

Plus, the only information about this company is that its domain name was created in 2016.

Is There Any Alternative To Jamalife Helpers Global?

Jamalife Helpers Global is not an ideal platform you will expect to give you financial freedom.

And there are many business opportunities that you can invest in and realize profits.

Among these opportunities is affiliate marketing.

Over the years, I have built more confidence in affiliate marketing.

Besides, this business model is budget-friendly. It is easy to manage and does not require any technical skills.

And in affiliate marketing, you’ll realize profits faster; you need to partner with already established companies.

Jamalife Helpers Global has not received any accreditation from Better Business Bureau.

And this makes it not a safe platform to invest in.

How Much Does It Cost To Join?

To register an account with Jamalife Helpers Global is free.

However, you must pay $5 to join their money-making scheme to enjoy their compensation plan.

Is This Platform Legit Or A Scam?

Jamalife Helpers Global has a lot of red flags to point it directly to be a scam.

And as I mentioned before, hiding details about the company owner has a negative impact when deciding whether one should join or not.

Besides, based on FTC guidelines, Jamalife Helpers Global is more likely to be a scam than what it claims to offer.

Is It Possible To Make Money From Jamalife Helpers Global?

Since the creator(s) does not want to be known, I don’t believe they’ll honor whatever claims they have in their compensation plan.

Finally, there is no way you would track or follow up on your commissions.

This website contains affiliate links, which means I earn money from products and services you purchase through my links. Learn more...